National awards for EAL learners in Scotland and Wales

SCOTLAND and Wales have celebrated EAL learners after they triumphed in awards ceremonies in two different industry sectors.

Apprentices Erin Thomson, from Dounreay Site Restoration Ltd, and Luke Mayor, from Cardiff and Vale College, have both won awards in national competitions in the nuclear and electrical sectors. 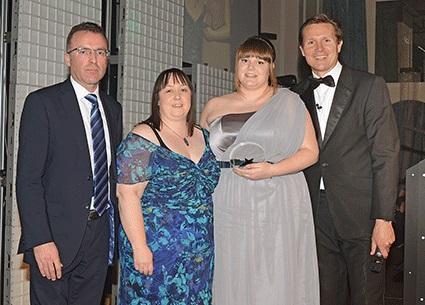 Erin, the first female engineering craft apprentice appointed at Dounreay for over ten years, won Scottish Nuclear Apprentice of the Year at the annual National Skills Academy for Nuclear awards ceremony. While Luke, representing Cardiff and Vale College, won the Sparks National Apprentice Electrician of the Year at the JTL Centre of Excellence in Birmingham.

She said: “I am delighted to have won this award; I never imagined an apprenticeship could bring this sort of recognition. I think it highlights the efforts by everyone involved in training apprentices at Dounreay, from the apprentice training team right down to the skilled tradespeople who see apprentices through their four years and SVQ’s.”

Luke, a second year apprentice, is following EAL’s NVQ3 Diploma in Installing Electrotechnical Systems and Equipment. He entered and won his regional heat of the Sparks UK Electrical Apprentice of the Year award, progressing to win the final over a two day competition.

Julia Chippendale, Managing Director at EAL, the specialist awarding organisation for industry qualifications, said: “It is fantastic to see both Erin and Luke collecting national awards for their hard work and dedication. They are role models for learners in their industry and beyond.

“EAL qualifications provide learners with a gateway to industry careers and employers with a qualified and competent workforce. It is vital our qualifications meet both their needs, and national recognition for learners undertaking our awards is a testament to both them and their employers.”