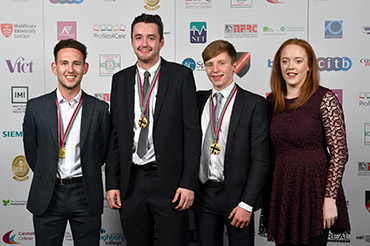 EAL has some of the UK industry's most talented learners, apprentices and technicians who were crowned Skills Show 2016 champions after three days of intense competition.

An impressive 31 EAL learners, almost half of those to make the national final, won a medal in their skills with 13 golds, 8 silvers and 10 bronze

A record number of EAL learners – 65 in engineering and three in SkillsElectric - were among more than 500 talented young people who took part in competitions covering 61 different skills over three days at Birmingham's NEC in front of thousands of visitors.

Independent judges assessed the work of competitors and the winners were presented with their medals at The Medal Ceremony on Saturday evening (Nov 19).

Al Parkes, Acting Managing Director of EAL, said: "We are very proud to have had a record number of EAL learners making the national finals of the Skills Show across the engineering and SkillsElectric competitions.

"They have taken the knowledge they are learning at college and in work on to a national stage, showcasing their talents and hopefully inspiring the next generation to consider careers in engineering and building services.

"Congratulations to all of our learners for making the finals and especially to those who have won Gold and the right to be named the best in their skill in Britain."

As well as the competitions at The Skills Show, a series of high profile speakers gave inspiring spotlight talks, seminars and there were Have-a-go opportunities in dozens of skills disciplines.