Our Exams System Is Available

We have now completed our upgrade of your Exams System and you can now run exams as normal.

You will need to have installed the latest version of Secure Client to deliver your exams successfully.
To support you our Exams Team will providing an exam scheduling service for all exams due to be delivered Wednesday 3rd, Thursday 4th and Friday 5th March 2021.

Josh is EAL Advanced Apprentice of the Year 2015 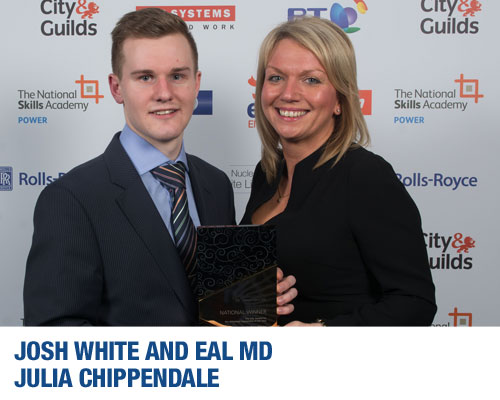 IBM apprentice Josh White is celebrating today after being named EAL Advanced Apprentice of the Year. Business analyst Josh, 24, from Coventry, beat off stiff competition from finalists Lauren Tiller and April Bell at the National Apprenticeship Awards held at The Grosvenor Hotel in London.

He will complete the final year of his apprenticeship with IBM in Warwickshire next month. Josh attended Bablake School in Coventry and he is a volunteer at Grapevine, helping young people with disabilities.

“I am surprised and delighted – it hasn’t really sunk in to be honest,” said Josh. “I have been getting calls all day from people within IBM congratulating me so I am starting to get used to it.

“My apprenticeship finishes on February 5 so I am looking to progress within IBM. I have been lucky enough to travel on a couple of occasions to Slovakia and would love to meet different customers in other locations – this award might help me towards that goal.

“Unfortunately my personal manager Kashif Taj couldn’t be there to see me win, but I want to thank him for supporting me. I also want to thank the Head of the Apprenticeship Scheme, Jez Brooks, who was with me along with my dad and girlfriend.

“My message to young people thinking about future career options is to keep an open mind. I had a very narrow mind around apprenticeships but when I began looking into them I realised a modern apprenticeship is nothing like the stereotypical image they sometimes have. It is worth considering as a great alternative to university. It has certainly worked out for me.”

EAL, the specialist awarding organisation for industry, sponsors the Advanced Apprentice of the Year Award to help inspire young people to follow the vocational route into a career as opposed to just considering university. 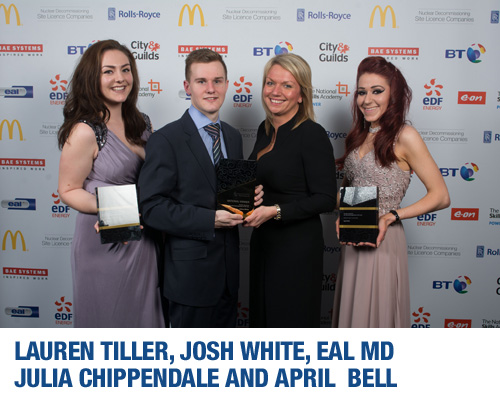 EAL managing director, Julia Chippendale, who presented the award said: “Josh was a very worthy winner. He is a fantastic role model for the future generation – we need more young people like him to take apprenticeships to ensure the UK has the skills it needs to succeed.

“It was also fantastic to see so many of the employers we work with recognised and inspiring to know we are at the heart of apprenticeships.

“To see MBDA’s Jade Aspinall pick up yet another award as Higher Apprentice of the Year was great as she and her fellow apprentices are magnificent advocates for EAL and ambassadors for apprentices.”

The glittering evening was co-hosted by Lizzie Moffat, a Vauxhall apprentice that was a founder member of the Industry Apprentice Council – the voice of apprentices across the country – founded and supported by EAL and the Enginuity Group.

Skills Minister Nick Boles said: “Congratulations to each and every one of the National Apprenticeship Award winners. Apprenticeships truly are set to be one of the great success stories of the decade, and tonight’s winners and finalists are worthy ambassadors.