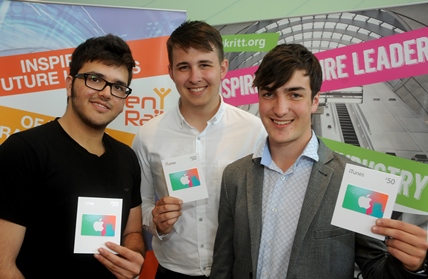 The talented team of three – who named themselves Total Train Integration – faced stiff competition from around the country after participants progressed through regional heats to contest the national prize.

Among the competitors, there was talk of using floor tiles to help power the station by converting energy from high footfall into electricity, and ticket scanners designed to help passengers locate their trains.

However, the Stockport learners impressed judges by being one of the only teams to stay within budget – delivering the project for £27m with options to reduce the cost further. The students took a minimalistic approach, incorporating a glass exterior to cut down on lighting during the day.

Among the Stockport team members, 18-year-old Lewis Rodgers has completed two EAL Level 2 Diplomas, in Engineering and Technology as well as Performing Engineering Operations. He said: “Before the final, and the Manchester regional heat, I hadn’t considered a career in rail, but I am now.”

The Gen Y Rail competition was launched by the UK Rail Industry Training Trust, with the inaugural event taking place this year, at Network Rail’s Westwood training facility. The competition aims to raise awareness and interest in careers in the rail sector, with categories for under-16s and over-16s.

The competitors were tasked with considering the effects, environmental impacts and the need to communicate with stakeholders in opening a disused railway line. They then had to design a new station with a limited budget of £30m. The designs had to include a roof structure, external cladding, vertical access power, paving, platforms, flooring, entrances and a choice of six shops.

Kash Ratyal, a project manager for Network Rail on their £600m Birmingham New Street redevelopment and a judge for the Gen Y Rail competition, said: “They had a budget of £30m to deliver the project but it was interesting to see how they thought about the challenge and tackled the needs of the stakeholders and all those involved. Once they got going they really got into it.”

Julia Chippendale, Managing Director of EAL, the specialist awarding organisation for industry qualifications, said: “This is an exciting time for the rail industry, with massive government investment in the UK infrastructure, with projects such as HS2 and Network Rail’s National Electrification project (NEP). There could not be a better time for young people looking at careers in rail.

“EAL is working ever closer with the rail industry to ensure the workforce is able to deliver the transformation to a world class transport system.”

For more information on qualifications to kick start a career in railway engineering.